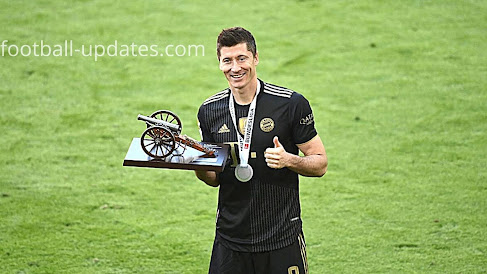 In football we can say that the most difficult task is scoring a  goal and that is one the stories that makes the stikers role the most important on the field.

Many football fans will often say that it is not worth to give player of the season awards to defenders.

Somehow the transfer market also aggrees to that cause th heaviest fees are often cammanded by the most frequent goal scorer. Being a striker nowadays does not just lie in scoring goals but you also have to link play, press, run and bully the opponents defenses.

Who is the best striker in the World ?

So hold on to this post and take a breath as we get down to discover the best strikers in the World.

If Robert Lewandowski had been fit to face Paris Saint-Germain in the Champions League quarter-final last season, the tie is perhaps a different story. The season as a whole, potentially, shifts to another realm.

That’s the influence of the big Pole - and he’s one of a dozen top-class players in the Bayern Munich's arsenal. Lewandowski managed 55 in 47 in all competitions when Bayern did the treble; he has 16 in 12 this time around. That’s ludicrous. And he’s supposed to be winding down at 33 years old, too.

Lewandowski has everything in his locker and he’s always a step ahead of everyone else. His finishing is unparalleled and he has a knack for always being in the right position at the right moment. It's not by chance either: if the ball drops to him, there's only one outcome.

In another universe, he has a second Champions League medal in as many seasons and looking for the third right now. He’s still the best striker in the world in this one.

Red Bull Salzburg has scored 17 goals in 16 league games this season. Borussia Dortmund has 56 points in 57 league games. It's frightening to think about how good Erling Haaland will be when he's 22, let alone 25 or 30.

Over the last 18 months, the awkward blonde giant has become the most sought-after player in the world. He's quick, he's beefy, and he can find the net's corner with his eyes closed; on top of that, he has a habit of delivering when it counts. Dortmund had a shaky season last year, but imagine what they'd be like without this truly world-class talent leading the line.

MUST READ: Who are the Best Center Backs In the World ?

OK, can we please dispel the myth that Karim Benzema was merely a foil for Cristiano Ronaldo at Real Madrid?

After all, the star attraction of 2010s-era Madrid was BBC, and Benzema was a vital central letter in that trio. The Frenchman hasn't slowed down over the years, either: he leads from the front with power, hard-running, exemplary passing, and, as Chelsea discovered the hard way last season, an uncanny eye for goal. Thank you very much, he's every bit as golden as your other Galacticos.

MUST READ: Top ten Left Backs in the World

Was there ever a man more clearly destined for the pinnacle of the game?

Kylian Mbappe has improved by leaps and bounds since his spectacular debut in European football, becoming an excellent left-winger last season and the focal point of the MMN front this season. He moves at breakneck speed, has an uncanny eye for goal, and exudes subtle flair.

For a while, we were perplexed as to what kind of striker Harry Kane was. He felt like a throwback, a Shearer-type box-dweller who could hit the ball hard but couldn't do much else.

Perhaps we weren't paying close enough attention. The England captain has gradually evolved into a Swiss Army knife of a forward, with passing range that would make the average deep-lying playmaker weep and off-the-ball movement that would tear defences apart. To be honest, he kept Tottenham Hotspur afloat last season.

He hasn't had the best season, but he's becoming more lethal as the season progresses and Antonio Conte builds his team around him. He's still a world-class player.

He never used to be a striker… but he certainly is now.

Diogo Jota was expected to provide backup to the most fearsome front three in football – and he's gone on to break it up. The Portuguese is a sure starter for Jurgen Klopp now, offering more running on the ball than Roberto Firmino, retaining what made him great as a winger. The goal record shows that something's clicked with him up front, alright.

CHECK OUT: Who are the best defenders in the Bundesliga ?

We've arrived at the point in time where we can legitimately call CR7 a striker. He now plays up front for United and remains as ageless and breathtaking as he ever was.

Ronaldo is an advertisement for mental toughness pulling you through. Have you seen him play in the Champions League this year? He's used to being number one or two on these lists, but given that he's now 37 and that Manchester United has crumbled around him due to his lack of all-round ability, we think he'll settle for sixth... or maybe not.

After scoring Euro 2020's best goal - an audacious 55-yard lob over Scotland 'keeper David Marshall - Schick's doubled-down this season, scoring at a rate only the very elite can match. There's been 18 in 18 Bundesliga appearances so far, for a Leverkusen side who have thrilled under new manager Gerardo Seoane. The Czech striker is perfect all-rounder: quick, great in the air, strong and intelligent. It won't be long before bigger clubs come knocking.

CHECK OUT: Five Best Left Backs in the Premier League 2021

Romelu's rise is one of the most glorious stories in recent football history. He was a round peg in a square hole at Manchester United, but now he's the European Champions' shining star.

While the Belgian is known for being brutish and strong, an underappreciated aspect of his game is his sheer intelligence. He can easily turn a defender, he's always in the right place, and his chemistry with other forwards - Lautaro Martinez last season, Mason Mount this season, or even Eden Hazard at international level - is dependent on his efforts to play to the strengths of others as well as his own.

1.Who is the best stiker in the World ? Robert Lewandowski