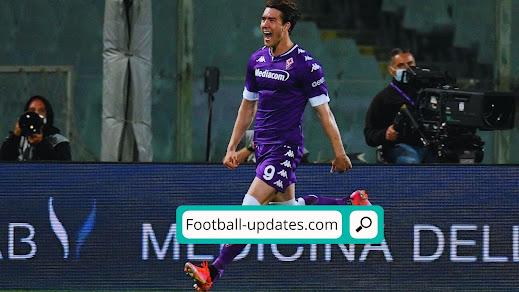 The 2021-2022 season has already come to an end and Inter Milan  have been crowned Champions of the the Italian Serie A.

Even though the absence of fans in stadiums have been strongly felt, it was a season full of ups and downs for every club involved and there was no shortage of excitement.The Serie A being one of the best among Europe's top 5 Leagues, it is home to some of the best attackers in the World.

Ranking of the Top Five Best Strikers in Serie A 2022

The Serie A being a great League, it has always housed some of the best strikers of the game of football but the question is Who is the best forward in the Italian Serie A 2022?

So without further talks, let us get down to our ranking of  the best forwards in the  Serie A for the  2021-2022 season.

Atalanta striker Duvan Zapata has maintained his position among the finest attackers in Serie A in each of the last couple of years. The Colombian had a decent outing in the Italian top flight last season, scoring 15 times and setting up another ten in 37 games.

MUST READ:Top 10 Best Forward in La Liga this season

He is showing no signs of slowing down this season. The 30-year-old has been a huge force to be reckoned with since the campaign kicked off, recording nine goals and five assists in 16 appearances in the division.

Zapata averages a goal every 134 minutes, with a goal ratio of 0.67 per 90 minutes in the Italian top flight..

Lautaro Martinez needs no introduction. The striker has been a huge force to be reckoned with in Serie A over the last couple of seasons, producing spectacular displays for Inter Milan.

He is currently one of the division's most productive forwards, having scored 11 goals and assisted on two others in 17 appearances. This includes six goals in his last six division games.

Lautaro Martinez appears to be on track to surpass the 17 goals he scored for Inter in Serie A last season. He only needs six goals to equal that mark, and everything points to him doing so very soon.

This season, Giovanni Simeone has emerged as a key player for Hellas Verona. With his brilliant goalscoring exploits, the striker has been a thorn in the side of many elite clubs in the division thus far.

This season, Simeone scored four goals against Lazio, two against Juventus, and one each against Napoli and Atalanta. In total, he has 12 goals in 19 Serie A appearances for Hellas Verona.

This season, the 26-year-old is third on the list of top scorers in the division.

Ciro Immobile has been one of the finest attackers in Serie A for many years. Thanks to his incredible consistency, the Lazio striker has once again made it into the list of the best forwards in the Italian top flight.

The Italian had a productive season last year, scoring 20 goals and assisting seven times in 35 Serie A games. Ciro Immobile has continued his outstanding form in the current season, scoring consistently for Lazio in the Italian Serie A.

With 13 goals and two assists in 15 appearances, the 31-year-old is currently second on the division's top scorers list.

The Fiorentina striker put up a great fight with the likes of Cristiano Ronaldo and Romelu Lukaku for the Serie A Golden Boot last season. His return of 21 goals and two assists in 37 games was the fourht-best recorded in the Italian top flight last season.

2. Who is the best Forward in the Serie A this season? Cristiano Ronaldo