African players who have played atleast once in Europe during their careers never left unnoticed because of their perfomances and for those that have followed the game of football for a good number of years niw the names on this list will be not be strange to you for sure.

Since the beginning of football, African players have always showed themselves as great footballers especially when it comes to goal scoring and defending. 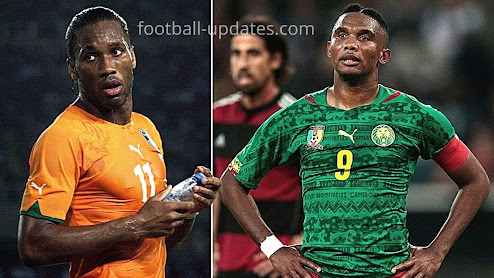 Over the recent years, the Continent of Africa have hosted incredible talents and in the last Century, African players have entered the World of football with a mind blowing speed , amazing dribbles accurate passes timely shots and most especially excellent scoring technic.

Nowadays, we can also see that some of the best strikers in the World are Africans. African players have proven their worth both in Africa and Europe.

So let us get down to our ranking of the African highest Goal scorers of All time.

Roger Milla is a Cameroonian professional player and it will be unfair to honour Roger Milla just for his contribution in the 2 Cameroonian World Cup campaigns in the years 1990 and 1994.

At international level, Roger Milla won the AFCON twice , golden boot of the AFCON twice, and was also named player of the tournament in the  year 1986.

Coming to club level, the Cameroonian international won a good number of French Cups during his career in France. He was also named 2 times African footballer of the year and also named by the CAF as African layer of the Century.

Even though you will see other players on this list who have scored more than   Samuel Eto'o but the no one on this list can compare the Cameroonian striker's overall impact so this is why he sits 2nd on the list.

MUST READ:Top ten Best African Defenders of All Time

Samuel Eto'0 were crucial to Barcelona's Champions League wins in the years 2006 and 2008.

He also won 4 League titles in Spain and Italy and also won the Pichichi award in the year 2006.

Coming to International level, Samuel Eto'o won the AFCON twice with his nation Cameroon and retired as all time top goal scorer of the AFCON with 18 goals to his name in the tournament.

Godfrey Chitalu is popularly known as the greatest Zambian player of all time due to the fact that he holds his national team goalscoring record and was also voted Zambian footballer of the year 5 times during his career.

Despites Drogba's struggle with the Ivorian national team, he did not represent the national team at 3 World Cups but was the top scorer at the 2010 Nations Cup.

Even though he remains the top goal scorer for Ivory Coast, whta mostly gives him this spot in this list, is his achievements with Chelsea.

He was named 2 time African footballer of the year is arguably Chelseas's greatest player and one of  Africa's greatest export to Europe.

We can say that Didier Drogba almost single handedly dragged the blues to the Champions League glory in 2012 and is the Club's 4th highest goalscorer of all time.

MUST READ:Top ten Left Backs in the World

The Ivorian international is the only player to have score in 4 FA Cups finals and he also won 4 Premier League titles during his career.

Mbokani is a Congolese professional soccer player who plays as striker for  Club Royal Antwerpt in the Belgian Pro League.

Previuously in his career, he has played for a multiple number of clubs like TP Mazembe, Anderlecht, Wolfburg, Monaco, Stadard Liege, Norwich City, Hull City and Dynamo Kyiv.

The Gabonese international Pierre Emrick is widely known for his finishing, pace and movement without the ball. He is also considered to be one of the best forwards in the game of football nowadays cause he has the qualities of a great forward in him.

Probably there is no doubt in Aubameyang's goal scoring track record, with the star player proving himself on many occasions as one of Europe's most clinical and reliable finishers.

He stands as the one and only African player to have win the Ballon Dor, surely he will always have a place in any discussion that concerns Africa's great in football.

Individually Weah won 2 African footballer of the year awards but he won relatively little at club career for a player of his kind.

At club level, he won 2 Serie A titles with AC Milan, an FA Cup in England and a Ligue 1 title but due to Liberia's low status, he never even won a silver ware with his nation in the AFCON.

1. Who is the African highest goal scorer? In terms of number of goals scored, we can say that it is Roger Milla but when it comes to impact in the career this award goes to Samuel Etoo because of his exploit.