Best Barcelona Midfielders of All Time 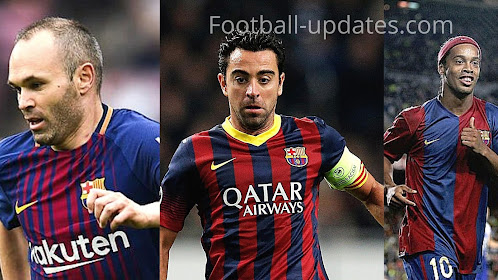 Since the establishment of the club FC Barcelon, the club have introduced great players to the world of football. Even though nowadays Barcelona is among the richest clubs in the world, the were once in financial trouble which means that they could not afford big players.

Just like many other great clubs, the Spanish giants Barcelona have had many talented midfielders from its early days. So even if you are not a football fan or lover, you might have surely come across the name Barcelona which is one of the richest clubs in the game of football.

Greatest Barcelona Midfielders of All Times

Barcelona being a wealthy club also means that they have that capacity to bring quality midfielders to the club in order to have a better team without much considering the price of that midfielder. So let us take a look at the list of Best Barcelona midfielders of all time.

Ronaldinho was born on 21st March 1980 in Brazil and he spend 5 seasons of his career with the Spanish giants Barcelona and went ahead to establish himself as one of the best Barcelona midfielders of all time.

The Brazilian joined Barcelona during a challenging period for the club and Ronaldinho  was responsible for the change in Barca due to his great skills and talent that he showcased on the pitch. Ronaldinho along side Barca's other young players such as Xavi, and Iniesta all together formed a great trio in the midfield.

The talented Brazilian joined Barcelona in the year 2003 and he made his very first debut against Juventus on the 27th July. Ronaldinho is among the only 3 Barcelona players who have been aplauded at the Santiago Bernabeu by Real Madrid fans.

The legend was applauded  in the 2005 El Classico at the Santiago Bernabeu and also played a vital role in Barcelona's 3-0 victory.

Ronaldinho was often known for his playmaking ability ,smile and joy every time he is on the pitch and he also transmitted a lot of joy every time he played the game. During the 207 appearances that he made for Barcelona, he scored 94 goals.

The legend has many individual achievements to his name for the period of time that he spend at Bacelona and these honors include;

Our next player on the list of Barcelona Best midfielders of all time is Xavi Hernandez.
Xavi was born on the 25 January 1980 in Spain and he played 17 seasons with the Blaugrana's before going on retirement though now a football manager.

Xavi is the next Barcelona player on our list of the Greatest Barcelona players of all times, he played as a midfielder during his career at Barcelona and he is often referred to as the King of passing in the world due to the great vision that he has from the middle part of the pitch.

At the age of 11, he joined the la Masia youth team and got matured on the pitch, then around 1988 he started representing the Barcelona senior national team and during his spell with the club he scored 85 goals.

Xavi's passing ability along side Messi, Iniesta and Busquet by then formed the tiki-taka that is a style of play. He is one of the best Barcelona players ever and during his spell with the Spanish giants, he won 8 la Liga titles, 3 Copa del Rey titles, 6 Super Copa de Espana, 4 Champions League titles, 2 UEFA Super Cup and also 2 FIFA Club World Cups.

Xavi also some individual achievements to his name such as; 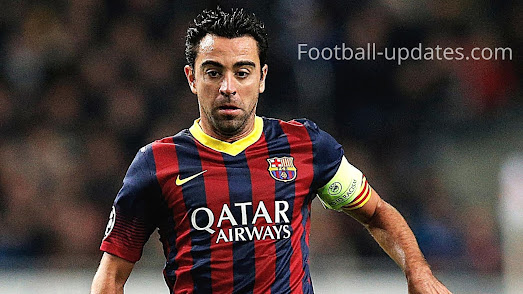 Here comes another midfield Guru, Andres Iniesta born on the 11th May 1984 and he represented Barcelona senior squad for 16 seasons playing in the position of a central midfielder.

Andres Iniesta surely could not be left out of this our list of the Best Barcelona midfielders of all time, due to the numerous achievements and performances that he showed at the club during his playing days with Barcelona.

MUST READ: Players with the Most Assists in Football History

Andres Iniesta joined the Barcelona senior team in the year 2002 and worked hard to establish himself as one of the greatest ever Barcelona players.

The legend serve Barcelona more than any other club since he joined the la Masis youth system when he was 12. Andres Iniesta was a player that even the opponent fans loved and he became the third Barcelona player after Diego Maradona in 1983, and Ronaldinho in 2005, who was cheered by Real Madrid fans at the Santiago Bernabeu.

Andres Iniesta made a total of 674 appearances at Barcelona scoring 57 times and providing 139 assists for his teammates.

In the year 2018, he left the club in tears to continue his career in Japan with Vissel Kobe.

Pep Guardiola was born on 18 January 1971 in Spain and he played for 11 seasons with the Barcelona senior squad. Often known as the Bald-head midfielder, he was one of the key players in the Barcelona Dream team that was coached by Johan Cruyff.

Pep Guardiola was a gifted and talented player who had great passing ability and he also represented a role model for Xavi and Iniesta. He served Barcelona more than any other club during his career as  a player and he won 6 la Liga titles, 1 Copa del Rey title, 4 Super Copa de Espana, 1 European Cup title and 1 UEFA Cup winners Cup and 2 UEFA Super Cup titles.

Pep Guardiola who is regarded as a hero for many young players, scored 12 goals in 366 appearances that he made for Barcelona before leaving the year 2001.

MUST READ: Most Career Hat Tricks in Football of All Time

Sergio Busquets was born on 16 July 1988 and has represented the Barcelona senior squad for 13 seasons and due to his creativity and his high ability to read the game, he is among the the best Barcelona midfielders of all time.

Sergio Busquets plays a decisive role for both the Barcelona squad and the Spain national team and he is among the players that many coaches aspire to have in their squad due to his way of positioning in the pitch with or without the ball.

He is the only player on this list that still currently plays for Barcelona and so far he has won 8 la Liga titles, 6 Copa del Rey titles, 6 Supercopa de Espana, 3 UEFA Champions League, 3 UEFA Supercup titles and 3 FIFA club World Cups.

Another great midfielder that have graced the midfield of Barcelona is Luis Enrique who was born on 8th May 1970 and has represented the Barcelona club for 5 years during his professional career as a footballer.

In the year 1996, Luis Enriqu left Real Madrid after a 5 season spell with them and joined Barcelona where he also played for 5 years but Barcelona fans did not agree with him being part of their team but he slowly gained a place among them over the years.

The Spanish midfielder who is one of the best best Barcelona midfielders made 300 appearances for Barcelona and scored 109 goals.

1. Best Barcelona Midfielders of All Time

2. Greatest Barcelona midfielders of All Time