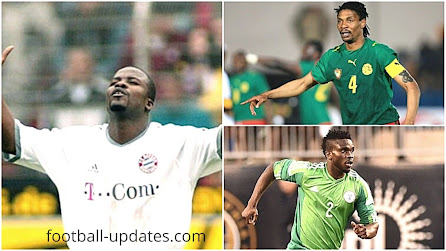 The quality of  African football can not be greatly compared to European football but there are some Africans who have really excelled even though in the European continent.

Even till date we count a great number of Africans playing World Class football in Europe and today we are going to base on the ranking of the Best African Defenders of All time.

Who is the Best African Defender of All times?

Even though we can say that defenders do not get as much recognition as players in other positions, we all know that their importance in a football team can not be understated.

We can say that defenders as just like our security at home cause they repel the opposition attacks and sometimes even go as far as launching one themselves and this can lead to a goal.

The Continent of Africa has given to the World of football some of the most talented defenders in history and so today let us get down to know the African defenders that proved themselves both domestically and at international level during their career.

Noureddine is a retired professional Moroccan footballer who spend the majority of his career playing for the Spanish club Deportivo La Coruna and in the Spanish League he is considered as one of the best defenders of his generation.

The player at some point in his career also played for Sporting in Portugal and Tottenham in England.

At the national level, Noureddine recorded 115 caps and represented his nation Morocco in 2 FIFA World Cups and 6 African Cup of Nations but without having to win one but once finished runner up with Morocco in the AFCON 2004.

The Cameroonian player Geremi Njtap ws one of Africa's most versatile players cause he could play in a variety of positions in the pitch but was often deployed as either right back, defensive or right sideid midfielder.

He started his career in his country with Baffousam and his first and only year there was a great success cause he won the Cameroon Premier League and Cup but he enjoyed most of his career glory in Europe.

At the summit of his career, Geremi Njitap was nominated for the year 2000 Ballon Dor , won 2 UEFA Champions League and also the Spanish La Liga with Real Madrid with 2 Premier Leagues during his time at Chelsea.

At national level, Geremi win 118 caps for Cameroon and won 2 African Cups of Nations and an Olympic gold medal with his nation.

The Cameroonian player Lauren was part of the Arsenal's invicinble team but his effort were overlooked.

Even though Lauren Mayer grew up and was raised in Spain, he decided to represent Cameroon with whom he won 2 African Cups of Nations and an Olympic gold medal.

The Cameroonina defender was part of the Arsenal squad that the double ; a Pemier League and an FA Cup in 2002 and most of his success came at his time at Arsenal.

He usually mentioned as a legend at Arsenal and always takes part during exhibition matches that invloves the clubs legend.

But unfortunately he retired at the early age of 25 years.

The Nigerian onternational was not only known for his colorful haristyle, but also for his great tackling ability on the ball.

The super Eagles defender was one of the most feared African defenders and even Africa's legend Samuel Eto'o said that " Taribo West was the defender who I feared the most" .

Same as the others on the list, Taribo started his career in his home nation Nigeria before moving to play European football where he enjoyed his glorious years.

During his time at Italy in Inter Milan , the Nigerian international won the UEFA Cup in the year 1998 and also he help Inter reaching that glory as he scored an extra time winner goal in the quarter finals against the German club Schalke.

At national level, Taribo was the the heart of Nigeria's defence on their way to the 1996 Olympic gold medal when they defeated the 2 great football nations Argentina and Brazil in the semi final and final respectively.

Kolo Toure who is the elder brother to Manchester City's legend Yaya Toure, showed himself as a great defender during his career.

Kolo Toure played most of football at the Premier League club Arsenal and was also a versatile player who could be used in a multiple of positions in the pitch.

Just like the Cameroonian Lauren Mayer on our list, he was part of the Arsenal team that finished an entire League season undefeated but sure;y enjoyed his most amazing performances when his club reached the Champions Legue final in the year 2005-2006.

MUST READ:Best Premier League eleven of all time

Any time you try thinking of a defender with great leadership skills surely Radebe comes to your mind for those who know quite well.

Radebe was the Captained at home club Kaizer Chiefs OF South Africa before he moved to Leeds United in England where he still wore the captain armband.

He was a versatiled player as he could played either as a midfileder, defender or a goalkeeper and he played all these positions during his career both at Kaizer's Chief and Leeds.

Nigeria's joint record holder for the most number of appearances made for the super Eagles, Joseph Yobo is one of the rare players of that generation that began their career directly in Europe cause he began in Standard Liege

But it was the Premier League Everton that he probably enjoyed the best period of his career as a defender.

MUST READ: Who are the greatest German footballers of all time ?

His 1st team success arrived when he moved to the Turkish club Fenerbahce where he won the Turkish Super League and Turkish Cups.

At international level, he captained the Nigerian team that won the 2013 AFCON.

The Egyptian Wael Gomaa is surely one of Egypts and Africa's greatest defender that have ever existed.

Wael Gomaa is the only player in this ranking who played all his career in Africa so if there is any defender who deserves to be mentioned amongst Africa's greatest ever is Gomaa.

The defender was a great set piece taker and he could score from both corners and freekicks.

In the year 2001, Wael Gomaa joined Africa's most successful club Al Ahly and he played a great part in the club.

He helped the club to 8 League titles and 7 of which where consecutively and was also a great part in the clubs 6 CAF Champions League trophies.

The Egyptian defender also helped his nation Egypt to win the AFCON on 3 consecutive occasions ion the years 2006, 2008,and 2010.

The Cameroonian footballer Rigobert Song is one of the greatest African footballers and he is also known for his defensive skills and is tireless works for his team.

The Legendary defender represented Cameroon in 8 African Cup of Nationsm a record that he holds till this time and in 5 of those competitions, Song was the Captain of the Cameroon national team and played a key role in their 2000 and 2002 titles.

Rigobert Song holds the record of Cameroon most capped player with as many as 137 caps to his name.

MUST READ: Who are the Best Center Backs In the World ?

Ironically, he holds the record of the youngest player to have been sent off in a FIFA World Cup when he was just 17 years of age. 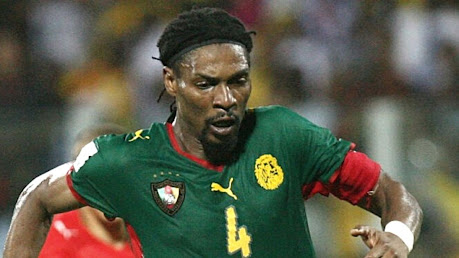 Sitting top in our list of the top ten best African Defenders of All time, is the Ghanaian player Samuel Kuffour for his consistency in one of the biggest clubs in the World.

The retired Ghanaian international  defender played the 12 years of his career at the German club Bayern Munich where he won 6 League titles and 4 German Cups.

1. Who is the best African defender of all times? Samuel Kuffour

2. Top ten of the best African Defenders of all times