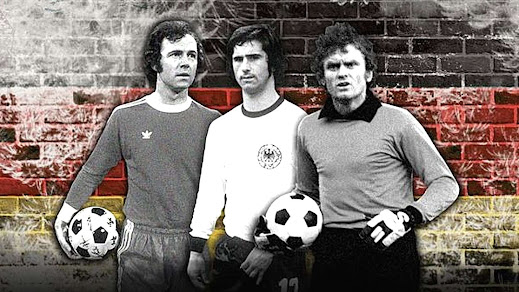 Germany is considered is known as one of world's football super powers. Germany have many achievements in the World Cup as compared to many other different nations and actually, they stand as the second country with the most number of World Cup wins, having won it 4 times.

Great football players have represented Germany for many in the history of the country and have helped the nation win numerous trophies. Most of the German players that will be listed in this ranking have played for the Bayern Munich club and also helped them achieved many trophies both at the national and the international level.

Top five of the greatest German footballers of all time

Germany is one of the greatest nations when it comes to World Cup achievements and since the German football association was founded, Germany has won a total of four world Cups in the years 1954, 1974, 1990 and 2014 and also three European  Championships in the years 1972, 1980, 1996 making them also one of the most successful and decorated national teams at international level.

Since the history of football, Germany has produced `many footballers who have left their names in the minds of football fans due to their performances. We the most noticeable German players being Franz Beckenbauer and Matthias Sammerr who were both outstanding in both club and country level and nowadays we have Thomas Muller who has a great vision in the mid field and can find spaces where no other can discover.

The power of German Soccer is from their team game spirit cause they like to work as a team instead of relying on one or two individuals. Over the past decades, Germany have made some great players that have become legends over time and have impressed millions of football fans with their spectacular performances.

The German international player Franz Beckenbauer is considered to be one of the best footballer of history. He was a central defender that could also play as a midfielder. Franz Beckenbauer played for 103 games for West Germany featuring in three FIFA World Cups and two European Championships.

In the year 1974, he won the FIFA World Cup as Germany's captain and once again during his years at a manager for his country , he still won the World Cup in the year 1990.

Zagallo and Didier Deschamp are also amongst the rare players to win the World Cup both as a player and a manager.

In Germany, Franz Beckenbauer is the first player to win the FIFA World Cup and also the European Championship at international and club level respectively and that is one of the reasons why he features as Germany's greatest player of all time.

He also featured in the FIFA World Cup dream team of the 20th Century during the years 2002 and 2004 as one of the World's best living players in the FIFA 100.

Gerd Muller was born in the home town of Nordlighen in Germany on November the 3rd 1945.

He is a renowned goal scorer and just some few goal scoring record were left unbroken by Gerd Muller as he was a goal scoring machine.

Amongst one of his record is him being the highest goals scorer for the German club Bayern Munich with a total of 566 goals while his goals to game ratio is unshakable in the European Cup history. Gerd Muller scored 10 goals in the 1970 world Cup with two hat tricks in the against Peru and another against  Bulgaria and such of these his performances secures him the gold ballon dor just a year before Germany won the Euro 1972.

He scored a brace in the semi final and finals of the Euro and later on completed his international career by scoring four goals at the point when Germany won the World Cup in the year 1974.

Gerd Muller is also considered as one of the Greatest players of all time in the World and one fo Germany's greatest player and goal scorer.

At the international level, Gerd Muller has scored 68 goals in 62 games so can still be comperd to the modern day football strikers.

This is a German professional player born in the year 1961 in Erlangen Germany and occupied the position of a midfielder.

Lothar Matthaus also one of Germany's greatest footballers of all time,he made a record number of appearances for the German national team(150 appearances) including winning the World Cup in 1990 and the Euro Cup 1980.he also finished the World Cup as runners up in the years 1982 and 1986.

He was an effective and efficient midfielder and also led and hep Germany defeat Argentina in the 1990 World Cup even though with the monstrous Diego Maradona in the team.

Lothar Matthaus won seven Championships with the Bundesliga club Bayern Munich in addition to one Serie A and a UEFA title that he won during his time at Inter.

Born on the 25 of September in the year 1955 in Lippstadt Germany, he is also one of German's greatest foottballers of all time.

Following the footsteps of other great germany players, he scored nine goals at three World Cup competitions including a hat trick in the year 1982 against Chile.

He became the second best goals scorer of the German club Bayern Munich behind his country mate Gerd Muller. He won the ballon dor in the years 1980 and 1981 because of his performances at the country and club.

Born in the year 1978 in Poland, Klose is the player who succeeded in breaking Ronaldo Nazrio's record in the 2014 world cup scoring 16 World Cup goals.

Who is the greatest German footballer of all time? Franz Beckenbauer

who are the top ten greatest German footballers of all time?