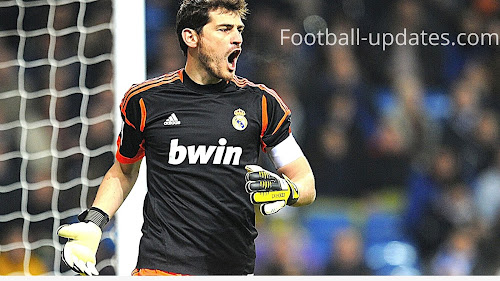 In Football, the post position of a goalkeeper is often referred to as the most difficult and any time a goalkeeper saves or blocks a ball, he is generally considered to be fulfilling in his role but any time he concedes a goal, blames often fall on him.

Even though the goalkeeping post is one of the most difficult position in the game of football, goalkeepers do not command a huge price in the transfer market as compared to the Forwards players.

Real Madrid being a great club, it is of no doubt that great goalkeepers have made their passage in that club and some others still dream and aspire to play for Real Madrid in future.

The main role of every goalkeeper is often defined by his ability to intercept the ball while protecting his goal and the yield is usually influenced by the goalkeeper's skill, technique, speed and his movement when covering the goal.

Here comes the one and only goalkeeper in the history of football to have won 3 Champions League titles in a row and this gives a great idea on his epic performances between the sticks.

He joined Real Madrid in the year 2014 from Levante and he knew he was coming to the club as a second choice goalkeeper but his hardwork and performances earned him the first  choice keeper of Real Madrid.

Immediately when Casillas left the club for the Portuguese club FC Porto he became the first choice goalkeeper and he showed great performances.

Keylor Navas spend 5 seasons at Real Madrid and he helped the club win 12 titles among which include the 3 Consecutive Champions League titles and no other goalkeeper have ever won this in the history of the game.

Any time when talking about the greatest goalkeepers in the history of Real Madrid, the name of the famous Ricardo Zamora can never be left out of that list.

The goalkeeper is regarded as the first great player in of Spanish football and it was to his honor that the Zamora award was established for the goalkeeper that conceded the fewest goals in the Spanish first division.

Ricardo Zamora was born in Barcelona and started his football career at Espagnol Barcelona before later on moving to Barcelona in the year 1919 and after 3 Season, he moved back to Espagnol.

In the year 1930, he joined Real Madrid at a fee of 150,000 pesetas and which at that time was the most expensive transfer in the history of football.

Zamora won numerous trophies with Real Madrid and among these trophies include the Spanish League that was introduced in the year 1928.

The Spanish goalkeeper Iker Casillas along side Buffon are undoubtedly the best goalkeepers of all time following the numerous achievements and performances that they have shown during their career.

In the year 1990, Casillas started his youth career with Real Madrid and when he gained promotion to the senior team, he remained with the club for a long 16 seasons.

Every prestigious trophy that you name like the Champions League, European Championship, World Cup, Iker Casillas has won it.

The number of trophies that the goalkeeper has won says a lot about his career and his performances on the pitch talks about the rest.

MUST READ: Five Candidates for the Ballon D'Or

Here comes the only German Goalkeeper on our list of Real Madrid's Greatest Goalkeepers of All Time. The German goalkeeper started his career in Germany with FC Koeln which is a club with no title ambitions in the next few years. He later on received an offer from the Spanish giants Real Madrid which by then was coach by Fabio Capello.

He joined Real Madrid in the year 1996 and from there, he helped them win  2 Champions League trophies and many other trophies.

After a few years, he was unfortunate that a series of injuries and the emergence of Iker Casillas sidelined him out of the Real Madrid starting line up in the 1999 season. Then at the end of 2000-2001 career, he decided to put an end to his sporting career.

Here comes the second Spanish goalkeeper on our list of Real Madrid best goalkeepers of all time. He first started his football career at Las Palmas but later on joined Real Madrid in the year 1961where he experienced his greatest achievements in his career.

Antonio Betancort spend his first season at Real Madrid almost without playing any of their official games because the club had 2 great keepers by then so he had to wait for his own turn reason why he was loaned to Deportivo de le Coruna.

He then returned to Real Madrid in the year 1963 where he played just 1 League game but the following season he took over full duty as the first choice keeper of the club.