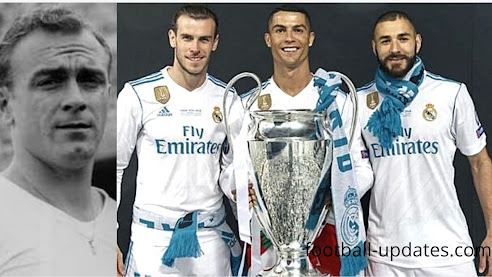 In football, there one and only way that can give your team the lead and make you a winner and scoring goals and this most important job of s striker and a forward.

Real Madrid being a great club, it is of no doubt that great strikers and forwards have graced the club but the issue to know the Best Real Madrid Forward of All Time.

The Spanish giants Real Madrid are currently one of the most successful and most decorated clubs in the world and they hold the record for most  La Liga and UEFA Champions League titles.

So here is the list of the Greatest Real Madrid Forward of all time since the history of the club.

Gareth Bale recently returned to his club Tottenham Hotspur where Real Madrid bought him but we surely cannot forget the 7 years spell that he spend with the Los Blancos.

In his first season in 2013-2014, he established himself as a key player for the club and help them achieve a lot.

It is of no doubt that Gareth Bale at his climax was a quick, strong winger with great heading accuracy, he also has that ability to to trigger attacking runs and this also made him being used as a striker.

MUST READ: Top Teams that have never been relegated in Football History

Francisco Gento was an outside  winger during his career and he played for Real Madrid from the year 1953 to the year 1971, thereby spending almost half of his professional career there.

Francisco Gento was often referred to as the " storm of Cantabrian" and he still holds the record of being the only player to win 6 European Cups during his career.

Together with Di Stefano and Ference Puskas, he was a member of one of the best teams that Real Madrid ever had.

Due to his dribbling skills and remarkable pace on the ball, he deserves his spot on the Real Madrid's Best ever XI. Francisco Gento Ha represented Real Madrid for 18 seasons, playing 600 matches and winning 12 la Liga titles in addition to the 6 European cups.

Here comes the only Brazilian footballer whose name features in the list of the All Time Best Real Madrid Forwards and still stands as the World Cup's 2nd highest goalscorer with a total of 15 goals.

Ronaldo as one of the greatest players of all times, he has numerous individual honors to his name like the Ballon d'Or, the golden shoe, the golden ball the silver ball and many others.

Ronaldo started his professional career at the young age of 17 and during his career, he played for several clubs including Cruizeiro, Inter Milan, PSV, Barcelona and then in the year 2002, he joined Real Madrid on a record fee of 46 million euros but he made just 127 appearances before suffering from a knee injury. he scored a total of 83 goals in 127 appearances for Real Madrid.

The legend Ferenc Puskas was known as the "Galloping Major" and he was a key player in the football history ; Hungary's Magnificent Magyars and Real Madrid's 1960 European Cup winners.

The Hungarian international was small, portly but his right foot was not really strong but his left however was a rocket and with his left leg, he scored most of his 746 goals in 754 games.

Raul played for 16 Seasons with Real Madrid and  due to his qualities and abilities infront of the goal, he is a role model to many young rising players.

Raul Contributed to many achievements in the club but just like Ronaldo, he left the club for Schalke 04 without any celebrations due to the clash that he had with Florentino Perez.

Karim Benzema arrived at Real Madrid in the year 2009 and he established himself as one of the best Real Madrid forward of all time. Due to his great performances in recent years, he have been named French player of the year for up to 3 times and has helped Real Madrid win a quite good number of trophies due to his scoring capabilities.

He is the only player on this list who still currently plays for Real Madrid and still keeps up with his skills and consistency upfront for the club.

He reached Raul's goals scoring record in the year 2015 and is now the highest goal scorer for the club with a total of 451 goals during his career with the Los Blancos.

During his career at Real Madrid, he won a good number of individual trophies too such as 3 FIFA Ballon d'Or,  2 FIFA Best Men's player, 3 European Golden shoe and many others.

But even though Cristiano who is one of the greatest players of Real Madrid, he left the club without any  celebrations due to to the clash that he had with the president of Real Madrid- Florentino Perez.

CHECK OUT: Top 30 Most Loyal Players in Football Top 10 Leagues

Alfredo Di Stefano was born on the 04-07-1926 and he played for up to 11 seasons as Real Madrid player. Alfredo DI Stefano remains the greatest legend in the history of Real Madrid due to the numerous achievements that he helped the club attain.

Surely all football experts consider the legend Aldredo di Stefano along side Maradona and Lionel Messi as the best ever players in the history of Argentine football.

Alfredo joined Real Madrid in the year 1953 and he led the club to Champions League glory 5 times as he scored in all 5 Champions League finals which is a record that will remain for long without being broken by any player.

He left Real Madrid in the year 1964 with 308 goals in 396 games and became Real Madrid top scorer for a good number of years untill Raul and Cristiano breaked the record.

During his years at Real Madrid, he won many collective and individual trophies such as the Pichichi trophy , Ballon D'Or. European Cup top scorer and also Spanish player of the year.

1. Who are the Greatest Real Madrid Forwards of All Time?

2. The Best Real Madrid Forward of All Time