Best Barcelona Forwards of All Time 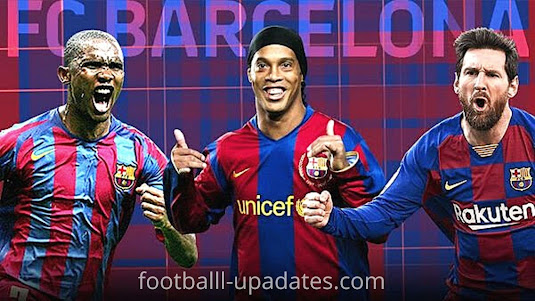 Since the establishment of the club FC Barcelone, the club have introduced great players to the world of football. Even though nowadays Barcelona is among the richest clubs in the world, the were once in financial trouble which means that they could not afford big players.

Now the question is among all of these great Barcelona players that have graced the clubs, who is the greatest Bacelona forward of all times ?. So stick on to your reading of this article and discover with us the Greatest Barcelona strikers  ever.

Even though strikers command a huge price on the transfer market especially when they are at their top showing quality performances, Barcelona have always had the best of strikers since their club history.

Almost no club can match Barcelona for remarkably skilled forwards and amazing strikers over the recent decades. Strikers are often seen as the match winners since their goals decides the fade of the team.

Strikers often need special training and added to that too, they need some traits such as high self confidence,speed, positioning, timing and also shot accuracy to become a killer striker and it seems that most the strikers that have played at Barcelona had these qualities.

It should be noted that wingers have been excluded from this ranking but players whose primary role is to score goals for the club were included and also in order to ease the ranking, goal ratio per game has been calculated for each player.

The Argetine player Lionel Messi was born on the 24th of June 1987 and has played 17 seasons with the Barcelona senior squad actually playing as a forward player.

Even those are not football or Barcelona fans, you must have surely come accros the name of Lionel Messi some where. Lionel Messi joined the Spanish giants about 17 years ago and since then he has kept on with the same consistency that he showed on the first day as he keeps on scoring goals for the club.

Lionel also stands as Barcelona's top scorer of all time with a tally of 636 goals and is also El Clasico's all time top scorer with 26 goals.

Lionel Messi is one of the few players in the world that have set many records in the world of football and also breaking some. Below, you will see the individual achievements of Lionel Messi so far with Barcelona;

MUST READ: Five Candidates for the Ballon D'Or

Of full name Luis Alberto Suarez Diaz and  born on 24th January 1987, he is a  Uruguayan professional footballer who played as a striker for the Spanish club Barcelona before being forced to move out of the club in the year 2020. He is often regarded as one of the top strikers in the World and he actuallyy comes as the second Best Barceloan striker of all time.

Luis Suarez moved to Barcelona from Liverpool in the year 2014 where he agreed a five year contract for a fee of £64.98 millions and this made him one of the most expensive players in the history of the game.

The Uruguayan international has all what is required from a world class striker, Luis Suarez was one of the best strikers ever to score goals for the Blaugrana due to his clinical finishing, fantastic movement with and without the ball, intelligence and dribbling skills.

In his first season at the Spanish club Barcelona, Luis Suarez together with Messi and Neymar formed an attacking trio that was known as the MSN which simply means ( Messi, Suarez, Neymar ) and they helped the club win the contnental treble of la Liga, Copa del Rey and the Champion League.

Samuel Eto'o Fils is a retired Cameroonian professional footballer who played as a striker at Barcelona from the year 2004. The Cameroonian professional footballer  Samuel Eto'o was ranked as one of the best strikers of all time and also one of the Best African player of all time as he won the African player of the year award 4 times.

The Cameroonian international was at the head of the Barcelona attack for five years from the year 2004 and he won all that a player can dream of winning with a club including 2 Champions League titles but it might sound surprising that the legendary Samuel Eto'o was never recognized with a Ballon d'Or even though in the year 2008, his performances were clearly above those of  Cristiano and Lionel Messi.

Samuel Eto'o was a great striker with amazing goal scoring abilities, intelligence , dribbling skills and also positioning as he was always where he needed to be in order to score a goal for the club. 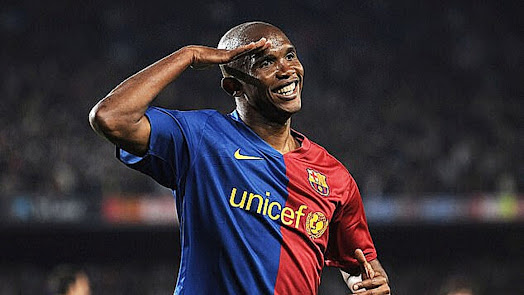 Neymar is a Brazilian professional footballer that was born on 5th February 1992 and he played as a Forward for the Spanish club Barcelona from the year 2013 to the year 2017 and due to his great skills with the ball, he is popularly regarded as one of the Best players in the World.

The Brazilian's move to Barcelona in the year 2013 made the headlines of many newspapers and could be referred to as the most talked transfer of the decade. The young Neymar on his arrival at Barcelona, he quickly established himself as one of the most important players in the Blaugrana's squad by then and it was so easy to forget that he was just 21 years by then.

Neymar linked up well with his team mates especially Messi and Suarez that came the following season and the young Neymar was real trouble to the opponent anytime he moved the ball forward.

Lionel Messi, Luis Suarez and Neymar dubbed "MSN" features among the best attacking trio that the game of football has ever known due to the great linking up play style that flowed between them on the pitch. But unfortunately these trio did not last long as the Brazilian Neymar decided to make a move to the French club PSG in the year 2017.

Zlatan Ibrahimovic is a Swedish professional player, born on October 3rd 1981 and actually plays as a striker for Serie A club AC Milan but he played for a single season with the Blaugrana in the year 2009 to 2010.

Having won a total of 31 trophies in his career, he is often regarded as one of the most best strikers of his generation and with his 31 trophies won, he is also among the most decorated active players in the world.

Zlatan Ibrahimovic signed a 5 year contract at Barcelona for 66 million euros from the Italian club Inter Milan and he was happy to be at the club as he said to a reporter that "it feels like I living a dream now" after he had completed his move to Camp nou but this dream did not last long as it quick became a night mare for him after just having played for 1 season.

The Swedish striker played just for a single season at Barcelona and was later sold to the Italian club AC Milan in the year 2011 after a loan spell.

MUST READ:Most Tattooed Footballers in the World

Ronaldinho was born on 21st March 1980 in Brazil and he spend 5 seasons of his career with the Spanish giants Barcelona and went ahead to establish himself as one of the best Barcelona midfielders of all time.

The Brazilian joined Barcelona during a challenging period for the club and Ronaldinho  was resposible for the change in Barca due to his great skills and talent that he showcased on the pitch. Ronaldinho along side Barca's other young players such as Xavi,and Iniesta alltogether formed a great trio in the midfield.

The talented Brazilian joined Barcelona in the year 2003 and he made his very first debut against Juventus on the 27th July. Ronaldinho is among the only 3 Barcelona players who have been aplauded at the Santiago Bernabeu by Real Madrid fans.

The legend was aplauded  in the 2005 El Classico at the Santiago Bernabeu and also played a vital role in Barclona's 3-0 victory.

Ronaldinho was often known for his playmaking ability ,smile and joy every time he is on the pitch and he also transmitted a lot of joy every time he played the game. During the 207 appearances that he made for Barcelona, he scored 94 goals.

The legend has many indidividual achievements to his name for the period of time that he spend at Bacelona and these honors include;

Rivaldo Vitor Borba Ferreira simply known as Rivaldo, was born on the 19th April 1972. The Brazilian former professional footballer mainly played as an attacking midfielder but also as a second striker.

He joined Barcelona in the year 1997 and by then, there was great instability at the club but together with Patrick Kluivert, they formed and important duo that greatly helped the club come back on stage gradually.

The Brazilian spend five years at Barcelona and he helped the club win 2 la Liga titles and a Copa del Rey title too.

In the year, Rivaldo scored a hat trick, the last goal of which was a last minute 20 yard bicycle kick winner to win the game for Bacelona and help them qualify for the Champions League.

Thierry Henry is a French professional football coach and former player who is currently the manager at the MLS club Montreal Impact.

The French player is considered as one of the greatest strikers  of all time and has often been debated by pundits and journalist as the Greatest player in the history of the game of football.

Thiery Henry was transferred to Barcelona in the year 2007 for a fee of 24 million euros and the following season, he was a key player for the club's historic treble as they won la Liga  Copa del Rey as well as the Champions League.

1. Who is the Best Barcelona striker? Lionel Messi