Greatest Barcelona Defenders of All Time

Since the establishment of the club FC Barcelone, the club have introduced great players to the world of football. Even though nowadays Barcelona is among the richest clubs in the world, the were once in financial trouble which means that they could not afford big players.

Now the question is among all of these great Barcelona players that have graced the clubs, who is the greatest Bacelona Defender of all times ?. So stick on to your reading of this article and discover with us the Greatest Barcelona Centre Backs ever. 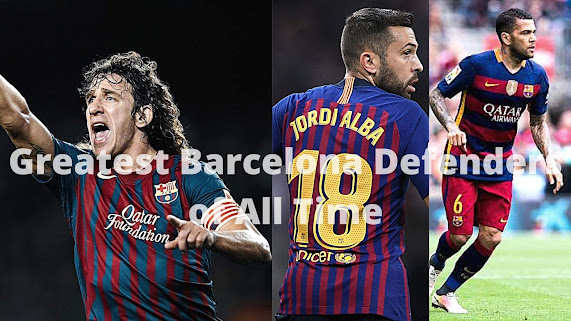 Defenders do not command a huge transfer fee as compared to forward players so a wealthy club like Barcelona can obviuosly affford every defender of their choice. Since he history of the club,m they have hosted some  of the best defenders of all time.

Any fooball club that wishes to reach glory or win most the games, they must great attension to every position on the pitch especially their defensive line.

FC Barcelona is one of the most successful clubs in Europe looking at the great number of trophies that they have won as already listed above.

Some of the Best Barcelona Defenders of All Time

Here are some of the Best Defenders of All time in the History of the club.

Carles Puyol was born on 13th April 1978 and played for 15 seasons with the Barcelona senior team playing as a defender. Carles Puyol is one of the 2 Barcelona defenders to feature on our list of the greatest Barcelona players ever.

Carles Puyol was a fearless defender and he stood as wall against the great strikers that tried to pave their way into his defence. During his spell at Barcelona, he played 593 times for Barcelona and won many trophies. with the club.

He captained the Barcelona squad for a decade and he was a very inspiring captain to his team mates.

The Barcelona legend announced his retirement in the year 2015, which means he played at Barcelona for 15 years.

He was often referred to as the "El Capitano" and he spend all of his professional career in Barcelona and achieved everything that can be achieved witha football club and so for this reason, he is undoubtedly one of the most important players in the Club's History and the Best Barcelona defender ever. 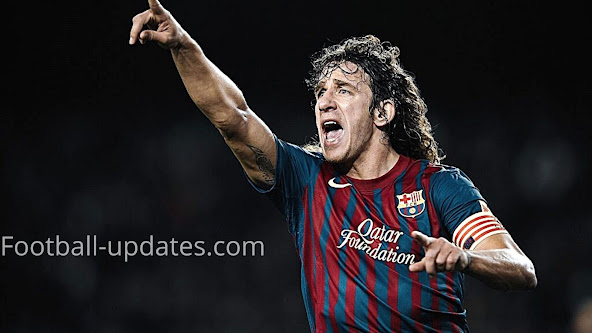 He was born on 2nd February 1987 and he has represents Barcelona for 14 seasons now playing as a Defender.

Gerard Pique Left La Masia youth team in the year 2004 to joined the English club Manchester United where he played for 4 years before coming back to Back to Barcelona in the year 2008. Pique is one of the few players that have won 2 consecutive Champions League titles with 2 different clubs.

Gerard Pique still actively plays for the Barcelona team even though not still in great form as comoared to his early years at the club but he stands chances of winning more trophies.

Gerard Pique played an important role in the " Golden Generation" of Spain that won UEFA European Championship in the year 2008, FIFA World Cup 2010 and once again Euro 2012.

The Legendary defender was recently awarded the " Player Career award" by Globe Soccer which was as a significant tribute to him for his glittering career as one of the Best Barcelona defenders ever.

Dani Alves was born on 6th May 1983 in Juazeiro Brazil and he played as a right back during his career at Barcelona and is surely among the Best Barcelona defenders of all time.

Just like Pique, Messi and Andres Iniesta, Dani Alves was part of the great Barcelona side that enjoyed a glorious career under the management of Pep Guardiola.

Also Dani Alves is one of the Best right - Backs of the modern generation. The Brazilian international joined Barcelona from Sevilla in the year 2008 for a fee of £32 million.

Dani Alves actually stands as the most titled player in the history of football with 42 official trophies and still on the count since he is still an active player even though not at Barcelona.

CHECK OUT: Top 5 Most Successful Players in Football History

In the year 2009, Dani Alves won a treble with Barcelona in his first season with the Blaugrana and a total  of 6 trophies in Calendar year and this still stands as an unbeaten record. After winning this gloriuos year at the club,he still went on to help the club win 2 more Champions League titles in the year 2011 and 2015, 5 more la Liga titles, 2 more Spanish Super Cups and 2 more FIFA Club World Cups.

Dani Alves during his stint at Barcelona had great harmony with Lionel Messi and assisted the him times numerous times. Dani Alves has played a total of 391 games with Barcelona and has provided 101 assists and scored 21 goals.

To some football experts, Dani Alves is not only one of the best Barcelona defenders of all time but also the best right back of all times in the history of the game following the fact that he is the most decorated player of all times as well as his astonishing performances on the pitch.

Ronald Koeman was born on 21st March 1963 in Zaandam , Netherlands and he played in the position of Defender and a midfielder during his career at Barcelona.

Ronald Koeman who is now the current manager of  Barcelona is one of the  best Barcelona defenders of all time and this due to his stunning performances and also his great scoring skills especially freekicks. To Justify, we can look back in the year 1992 in a European Championship final at Wembley stadium against Sampdoria where is free kick goal won Barcelona's first European Cup.

Even though he played as a defender, he had the ability of making long range and accurate passes and his powerful shots too will always be remembered by the club fans.

The Dutch man was a member of the famous " Dream Team" whose manager was the legendary Johan Cruyff. Koeman helped the Blaugrana win 4 consecutive la Liga titles from the year 1991 to the year 1994. Also he is regarded as the most attacking defender of all time due to his ability and accuracy in scoring free kicks, penalties and also making long range passes.

Ronald Koeman actually stands as the top scoring defender in the history of football with 106 goals scored for Barcelona in 350 games.

Jordi Alba Ramos was born on the 21st March 1989 in Spain and he actually plays in the position of a Left Back and has featured as one of the best left backs in the world in the recent years due to and amazing career with Barcelona and the Spanish national team.

Jordi Alba was a little unlucky for not being part of the Spain's team that won the EURO 2008 and the World Cup 2010, he was Del Bosque's first choice in the 2012 EURO Cup that Spain still emerged as Champions for the second time in a row.

Jordi Alba is often known as one of the most offensive left backs in the game of modern football due to his quick runs that he usually makes any time there is a counter attack upfront. So far with the Spanish giants, he has helped them win 5 LA LIGA titles, 1 Champions League title and 4 Copa del Reys  since he joined the club.

Jordi Alba is the first choice for the club in that position of a left back and so far he has scored 18 goals and provided 73 assists.

1. Who is the Best Defender in Barcelona History? Carles Puyol is by most as the best FC Barcelone defender ever.

2. Who is the best Barcelona Right back? Dani Alves

3. Greates Barcelona defenders of all time