Barcelona Biggest Losses of all time: Worst Barcelona Defeats Ever 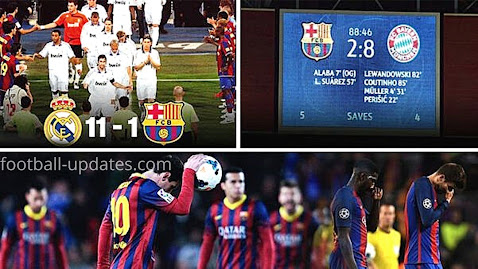 Barcelona is a wonderful club and probably one of the greatest clubs in Europe and the world at large. The club has won many honors since its creation but alongside these success, the club has experienced hard days and heavy defeats that have pushed it fans to leave the stadium in tears and disappointments.

Since the establishment of the club, the Blaugrana have had some wonderful players that have represented the club and help them overcome many trophies.

The club FC Barcelona is undoubtedly one of the greatest football clubs of all time and this club is often referred to as "mes que un club" and this means " more than a club".

Barcelona is one of the most successful clubs in the world and all great players from  Diego Maradona, Pep Guardiola, Thierry Henry, Ronaldinho to Lionel Messi have played for this team and also contributed greatly to the success of the team.

But even though  the great players, the club has also faced some really dark days that have shocked fans and football lovers around the whole planet.

Last year , one of the Barcelona greatest losses that can never be forgotten, came in  a Champions League game against Bayern Munich in the knock out stage with Bayern Munich inflicting a heavy and shameful defeat on the catalans even though their legendary player Lionel Messi was in the field.

So if you have ever wish to know the biggest Barcelona losses of all time, then this is the right article for you.

So finally let us get down to our main reason for this article and take a look at the list of Barcelona worst ever defeats in history.

July 14th August 2020 is a date that will not easily go off the minds of football fans lover especially he catalonians as Barcelona experienced a humiliating defeat to Bayern Munich in the quarter finals of the Champions League. Barcelona was inflicted 8-2 by Bayern Munich that night and this results marked the end of their disappointing season without a single cup to show.

Barcelona lost both the first and the second half of the Champions League quarter final on a score 4-1 but the German club did not showed any mercy to the Catalans.

The score was embarrassing but what made Barcelona more embarrassed again was the brace from Philippe Coutinho who played on loan for Bayern Munich and in just 15 minutes on the pitch, showed a killer response to the unkindness of Barca executives.

The German striker Thomas Mueller who scored a brace too that night against  Barcelona said that " When we played against Brazil, we were not as in control as we were against Bracelona. Against Brazil, it happend, we were good, we wanted here to play like we have done the few weeks" He continued: "We knew it is never easy against Barcelona but this is an unbelievable result. It is hard to comprehend".

Barcelona had already won a somehow comfortable 3-0 win over Liverpool at Camp nou but in the return leg of the game at anfield, the story became different. Liverpool needed to score in the first minutes of the game in order to come back into the game and what they did.

Even though one Liverpool's key players Mohammed Salah missed out on that match, the semi final return leg still ended 4-0 in favour of Liverpool and they qualified for the final and this entered the Champions League book as one of the biggest come back in history.

The fans of Barcelona will never forget this humiliating defeat, which is one of the heaviest losses in  Barcelona history.

The game between Real Madrid and Barcelona is often referred to as EL Classico and this is the most watched game football match on the planet earth. Throughout history of the sports, Barcelona and Real Madrid have proven that this El Classico game is more than just a football game for them since the match intensity and tension if often nor of this world.

In the year 1935, more pricisely in February 3rd, when the Los Blancos inflicted a heavy defeats on the catalans in an EL Classico game and Lazcano score a hat trick, Sanudo scored 4 times and Regueiro scored once to give Real Madrid an 8-2 victory over Barcelona.

Another rewind again back to the year 1940 where Barcelona experienced its biggest loss of all time against home League rivals Sevilla when they were defeated 11 goals to 1. It might sound somehow surprising to hear that Barcelona score first in that game to take the lead then after Sevilla netted 11 times to win the game.

Sevilla scored all their 11 goals from the 23rd minute of play to the 83rd minute of the game to seal a tremendous win against Barcelona. This humiliating defeat was one of the worst for Barcelona since the inception of the club and at the end of that season, Barcelona finished just 4th on the table while Seville finished 5th behind them.

It is necessary to mention that that the Barcelona talisman was on the bench and this greatly surprised everyone.

In the year 1943, during an El Classico match in the Copa del Rey semi final where Real Madrid opposed Barcelona, Barcelona defeated Real Madrid 3-0 in the first leg of the game at the Camp nou stadium.

But in the second leg of the game, Barcelona seemed to have loss total control of the game as Real Madrid inflicted upon them a heavy defeat of 11 goals to 1 and this result caused many rumors.

The wife of the Barcelona goalkeeper who went to the cinema fainted by the time she realised that her husband conceded 11 goals in a single game.

After this heavy defeats too, the 2 club presidents were forced to resign from their duties as president of the club.

Barcelona also experienced one of their biggest losses in the year 1931 against domestic rival club Athletic Bilbao as they inflicted on Barcelona a heavy defeat of  12 goals to 1. Before that game, Athletic club had already defeated Real Madrid by 6 -0.

In the match against Barcelona, Athletic club scored as early as around the second minute of the game ad then they scored 11 more goals as the game went on.

1. What was the biggest loss for Barcelona? Atheletic club 12-1 Barcelona