The 8 Highest International Football goalscorers of All time 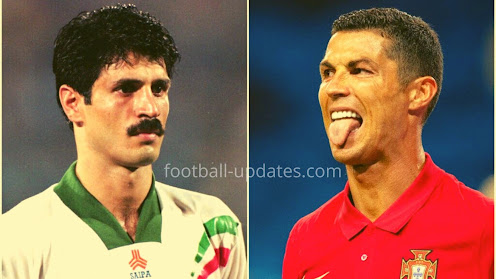 In the World of football, playing for your national team is great honor as well as scoring in your games for the national team is bigger honor. Great players have changed or decided the fate of their country by scoring goals in big tournaments such as the World Cup and the Olympics.

Scoring goals for your national team features among the proud moments for every football player but being the top scorer of a selection is quite a had job that requires a lot of effort and concentration.

From Pele to Cristiano Ronaldo, stay glued to this post and discover the names of other players who feature in the list of highest goal scorers in international football history.

On the 1st of September 2021, the Portuguese striker Cristiano Ronaldo Broke Ali Daei's record of 109 goals  scored at international level by netting twice against the Republic of Ireland.

Scoring goals for your national team features among the proud moments for every football player but being the top scorer of a selection is quite a had job that requires a lot of effort and concentration. So let us take a look at the ranking of international top scorers of all time.

Actually, the Portuguese legend Cristiano Ronaldo has become the highest ever international football scorer as he recently broke Ali Daei record of 109 goals due to his great goal scoring exploit.

The goal scoring machine just recently set a new record to his name as he surpassed Ali Daei record by netting twice against the Republic of Ireland in a World Cup qualifying game.

Cristiano Ronaldo was called up to the Portugal senior national team in the year 2003 but he scored his first goal against Iran in the 2006 World Cup. Then at the age of 22, at Carlos Silva, the president of the Portuguese Federation requested that he become captain of the Portugal national team.

Cristiano Ronaldo has so far scored 111 goals in  180 caps for the Portuguese national team. Cristiano Ronaldo still being on active service as a player and in god form, means that he has the ability to bring this record as far as he can by scoring more goals at international level.

Ali Daei is an Iranian legend that was widely known as Shariar and he is the second highest goal scorer at international level with his 109 goals for the Iranian national team. He was born on 21st March 1969 and he has played for numerous clubs such as Bayern Munich, Hertha Berlin and Arminia Bielefeld.

Ali Daei was widely known for his great ability in the air due to his slight advantage of his height. Ali Daei won most of his duels in the head to head the ball into the net of the opposition. He was the first Asian player to play in a UEFA Champions League match and he scored twice against the Premier League club Chelsea in a group stage match.

I believe this name is not familiar to the world of football but he is actually the third highest goals scorer at international level with his 86 goals scored in 131 caps for the Maysian national team.

He started his career with Selangor and immediately became the teams top scorer in the first season. The legend helped the club win 10 trophies and he scored 175 goals for the club. He was called up to the Malaysian senior national team at his tender age of 19 and in 1972, he made his first debut against Sri Lanka.

In the list of the highest international goal scorers, Ferenc puskas is in the 4th place but if we want to look at the goals ratio at international level then he surely tops the table cause he has scored more goals in a fewer number of international matches.

In the year 1945, he was called up to the Hungary national team and on August 20 1945 he made his first debut for his nation against Austria and he managed to score 2 goals.

Ferenc Puskas who is one of the highest ever international goal scorer, scored a total of 84 goals in 85 matches.

Here comes another unfamiliar name to the football world but this time around from the African continent and he is  one of the highest goal scorers in international football history.

The Zambian international player made his debut against Uganda in the year 1962 but he did not scored in his debut game. Godfrey Chitalu is one of the with the highest number of international goals in the world but he actually stands as the highest ever goal scorer in the African continent.

In the year 1957, Pele was called up to the Brazil national team and on 7th July 1957, he made his debut against Argentina, and at the age of 16 he managed to score his first goal thereby becoming Brazil's youngest ever goal scorer.

Here comes another outstanding player that has a high goal scoring ratio at international level and he made his first debut game for Japan in the year 1964 in a match against Singapore and he managed to scored one goal in his debut game.